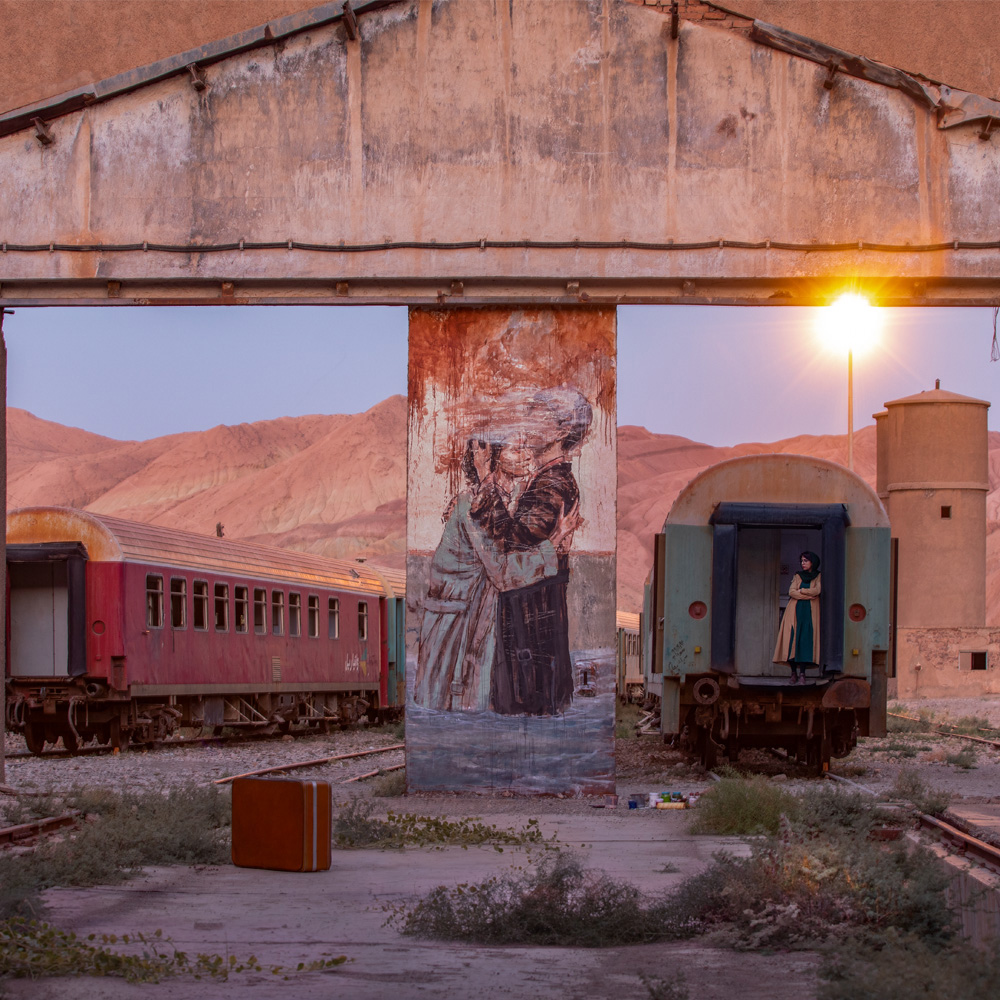 Scattered memories of a distorted future

On eighth January 2020, when I found out the Ukrainian airplane had crashed in Tehran and all its 176 passengers and crew died, I fell into a deep silence of grief and despair. Since then, different sorts of unfortunate events have come: political turbulence, water crises, recession, Immigration of my family members and friends, and the Covid virus as the crown of all problems. When I wake up in the morning, I am like a demolished place, and everything seems to be in ruins: myself, my family, my friends, my relationships, my city, my country. The suffering we endure manifests itself in the language of ruins. As an artist, amid all this suffering (the language of the present), I hope to find how artistic creation can be healing, inspiring, and effective? What effect does the artist have on this ruin? What role do we have in the ruins of men’s buildings? In this series, ruins have become the metaphor for pain. Here, between the silent past and a distorted future, I invited female painters to paint what they like in abandoned places; a painting on the masculine history, a picture on the face of the past, and an unanswered question for the future. 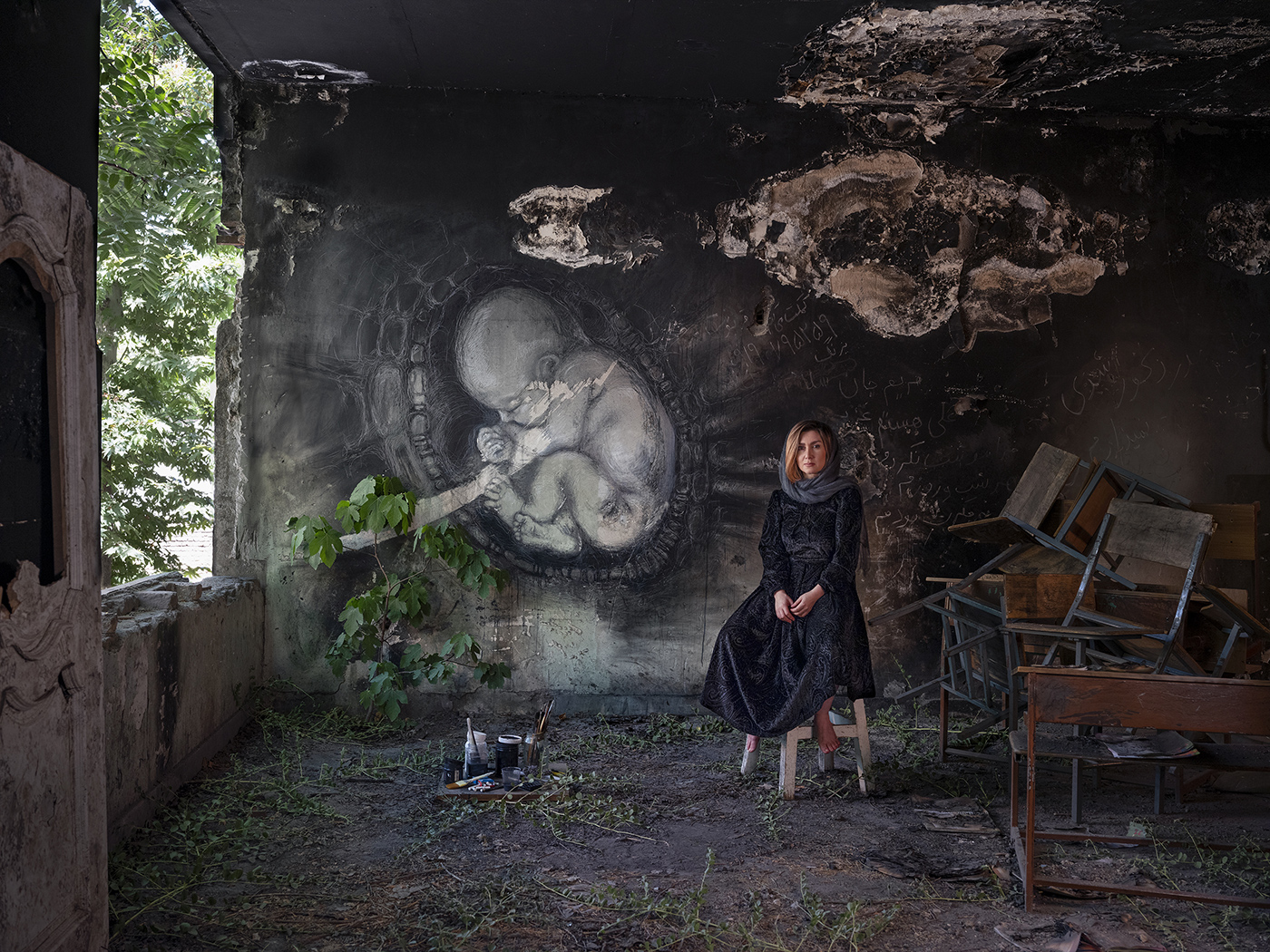 Sahar Nahavandi:  Sahar painted on the wall of a burned school which is about to be demolished for new construction. This school has not been working for 30 years and is located in one of the most prosperous streets of Tehran. 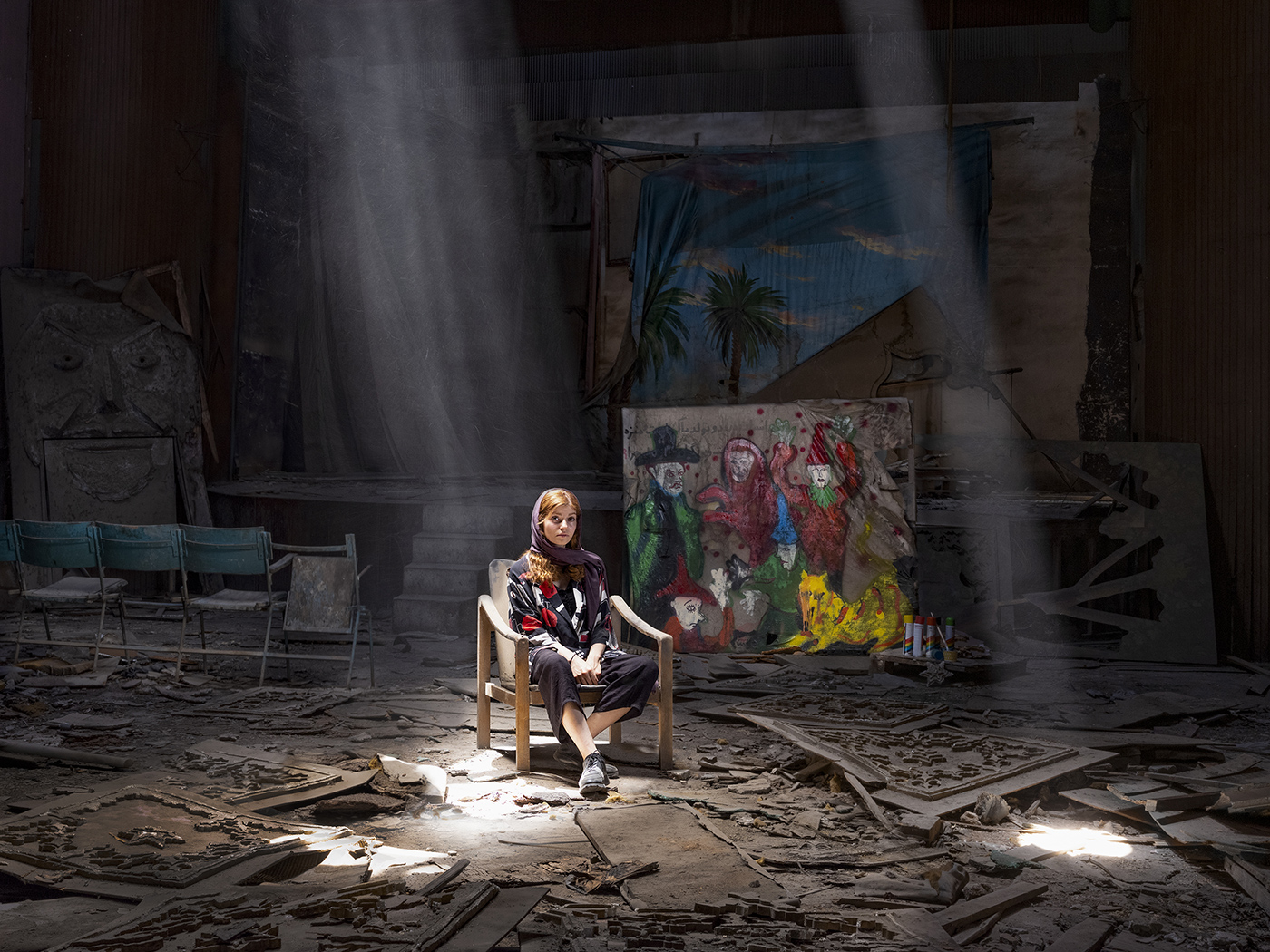 Sorahi Rafati: Sohari painted on a billboard of a one-hundred-year-old theater, which has been closed since the Islamic revolution. Sorahi has recently held her first solo exhibition in one of Tehran’s galleries. She does not have a particular plan for her future, but all her dreams are summed up in her art. 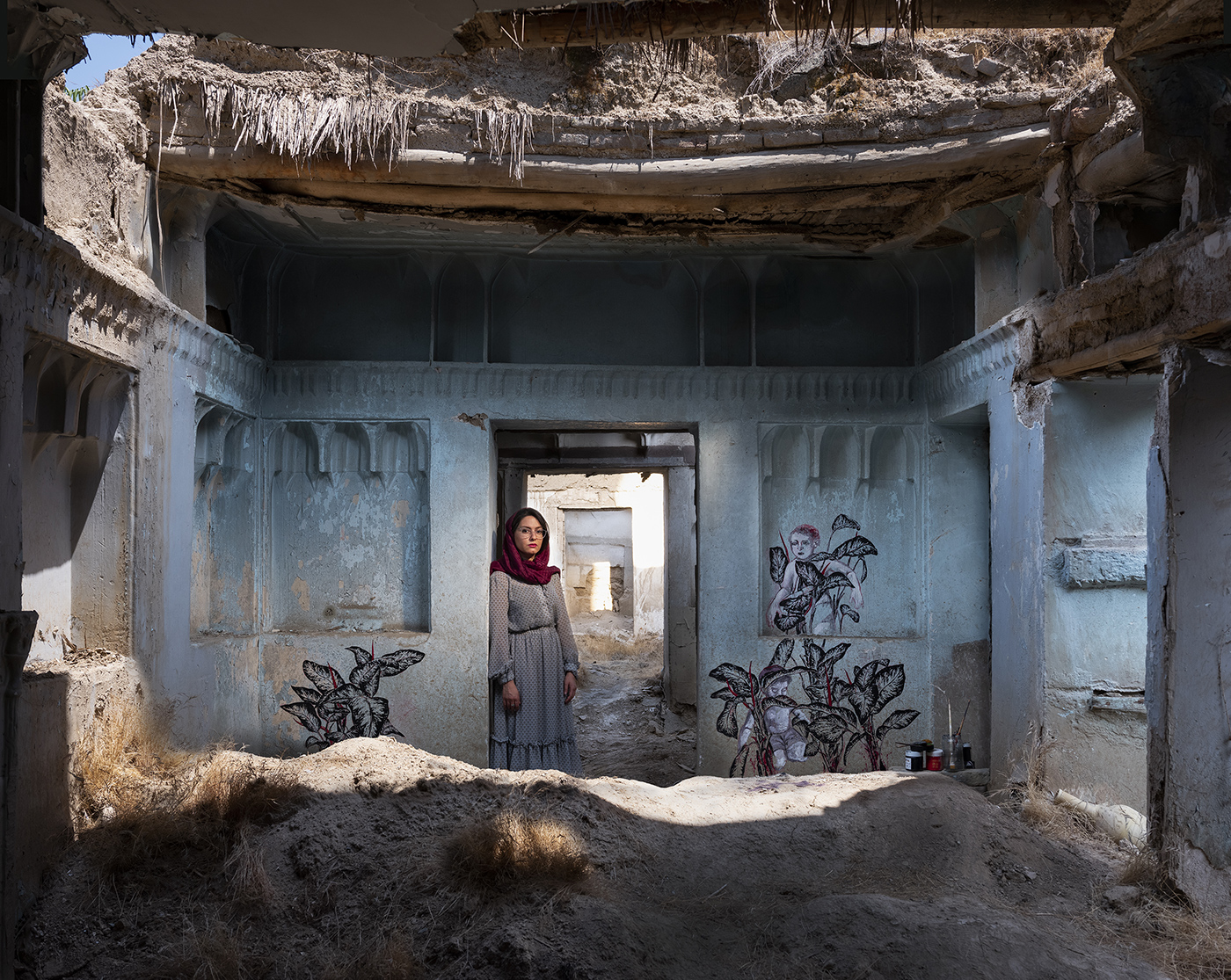 Pooneh Oshidari: Pooneh painted on the wall of a 150-year-old house that belonged to a master of mysticism and philosophy from the era of Nasser al-Din Shah Qajar and is located in one of the oldest streets of Tehran. The house has been abandoned for 40 years and its owner lives in the United States. Pooneh is an international artist who had planned to immigrate to the United States three years ago but gave up on the verge of relocating. She, who has dedicated her entire life to art, is deeply concerned about Iran’s environment. Pooneh is also very active on social networks and writes about the drought and water shortage in Iran. The main theme of her work is concentrated on her relationship with the environment. 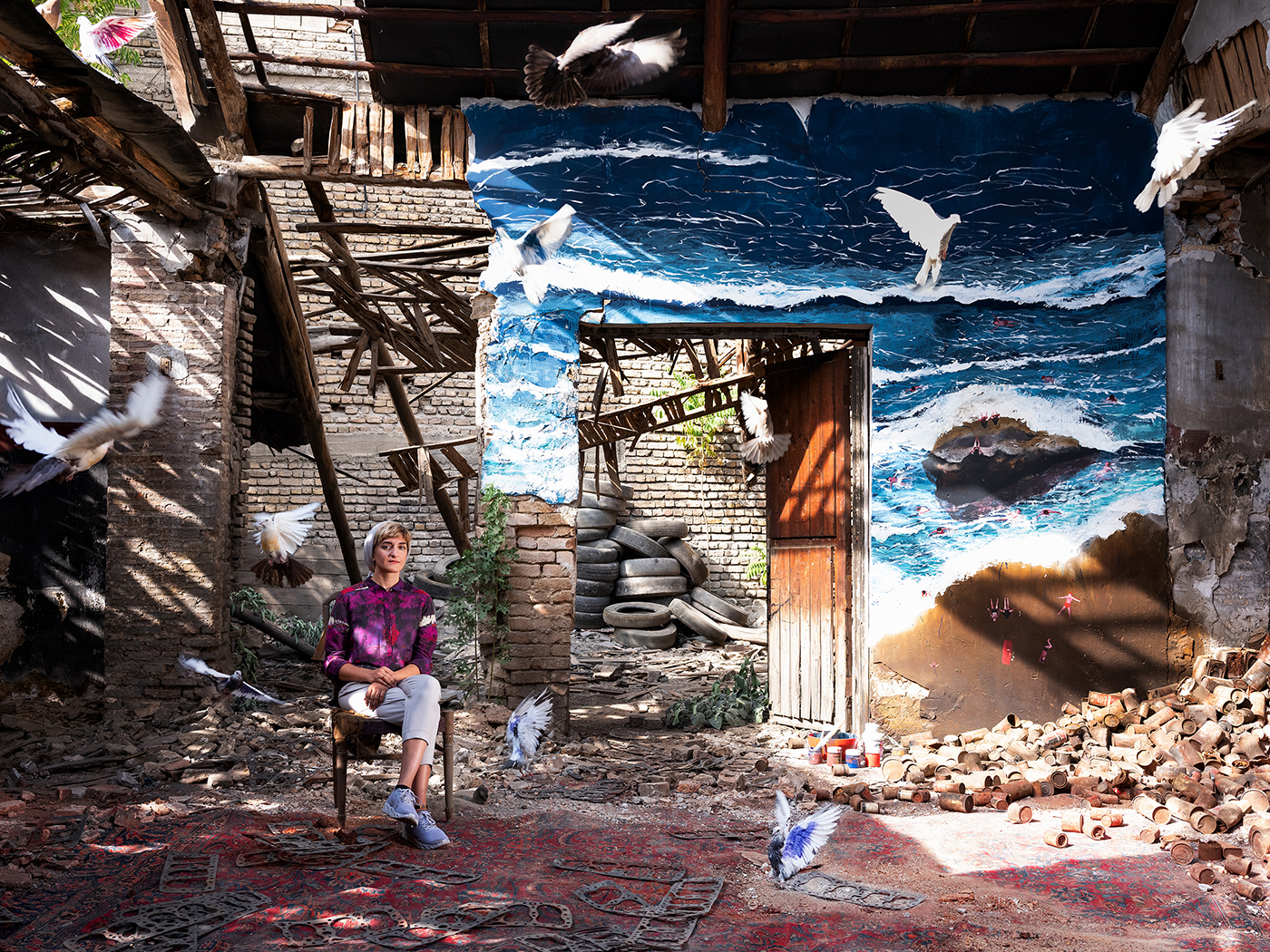 Najme Kazazi: Najme painted on the wall of an abandoned garage in the center of Tehran. This garage has been vacant since the revolution and a watchman along with his family lives here to prevent addicts from transpassing. The guard collects and keeps pigeons for fun, as he does not have much work all day. Najmeh has had a difficult time in the last two years due to family problems, and painting has played a saving role for her. She, an inspiring painter in the Iranian art scene, believes that we create art to save ourselves because our own salvation might lead to the salvation of the world. 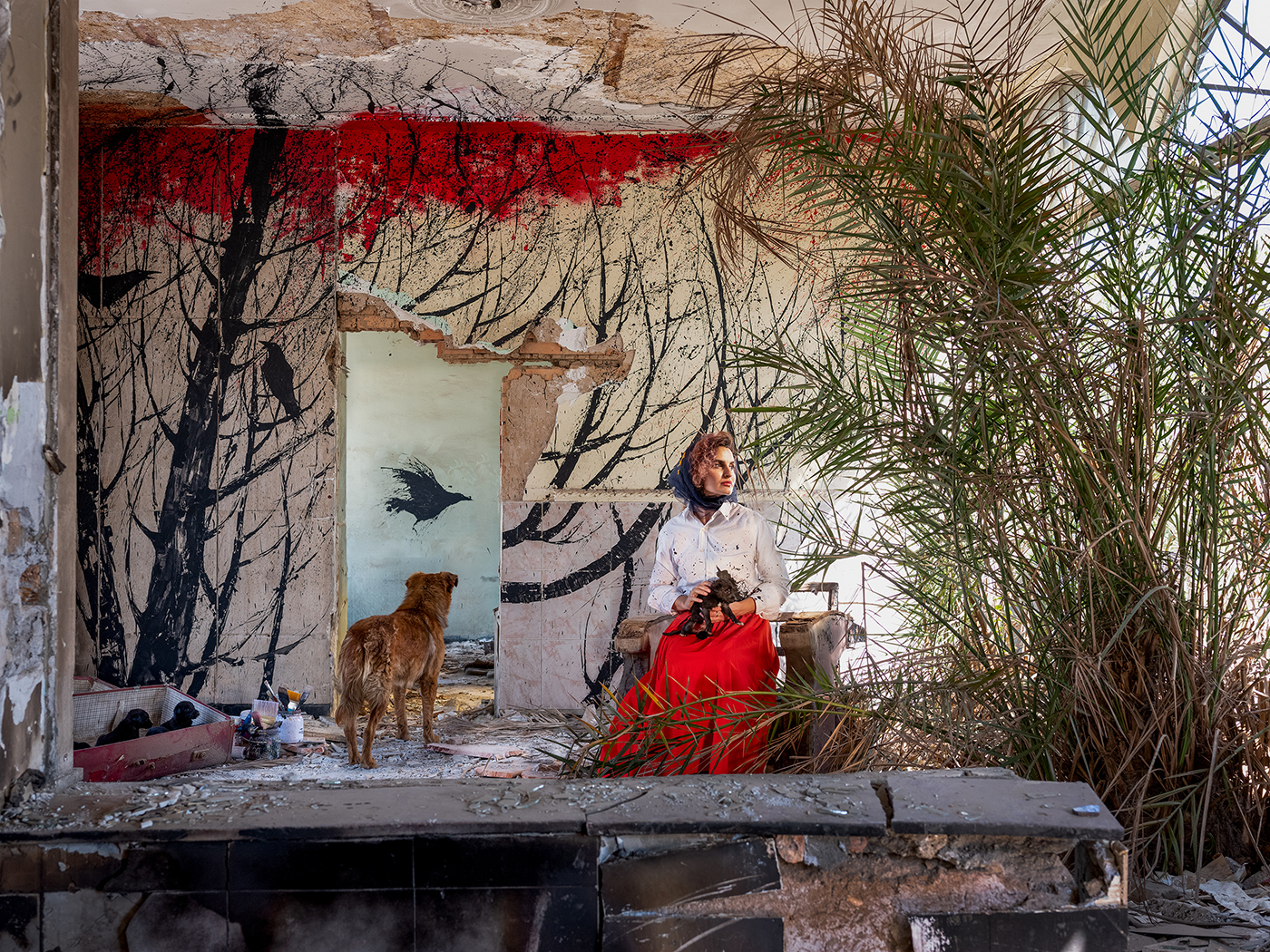 Fatemeh Eslamayan: Fatemeh painted on the wall of a 70-year-old gas station office that has been abandoned for 30 years. This place was used to run by female employees before the revolution. Now it guarded by stray dogs for many years. Fatemeh, practicing painting since she was a teenager, has recently changed her painting style and believes that one should always seek new experiences in life. Recently she has given up on figurative painting, and she is experimenting with abstractive style. She loves Iran and immigration is the last thing on her mind. She believes that there is always hope for the improvement and construction of her country. 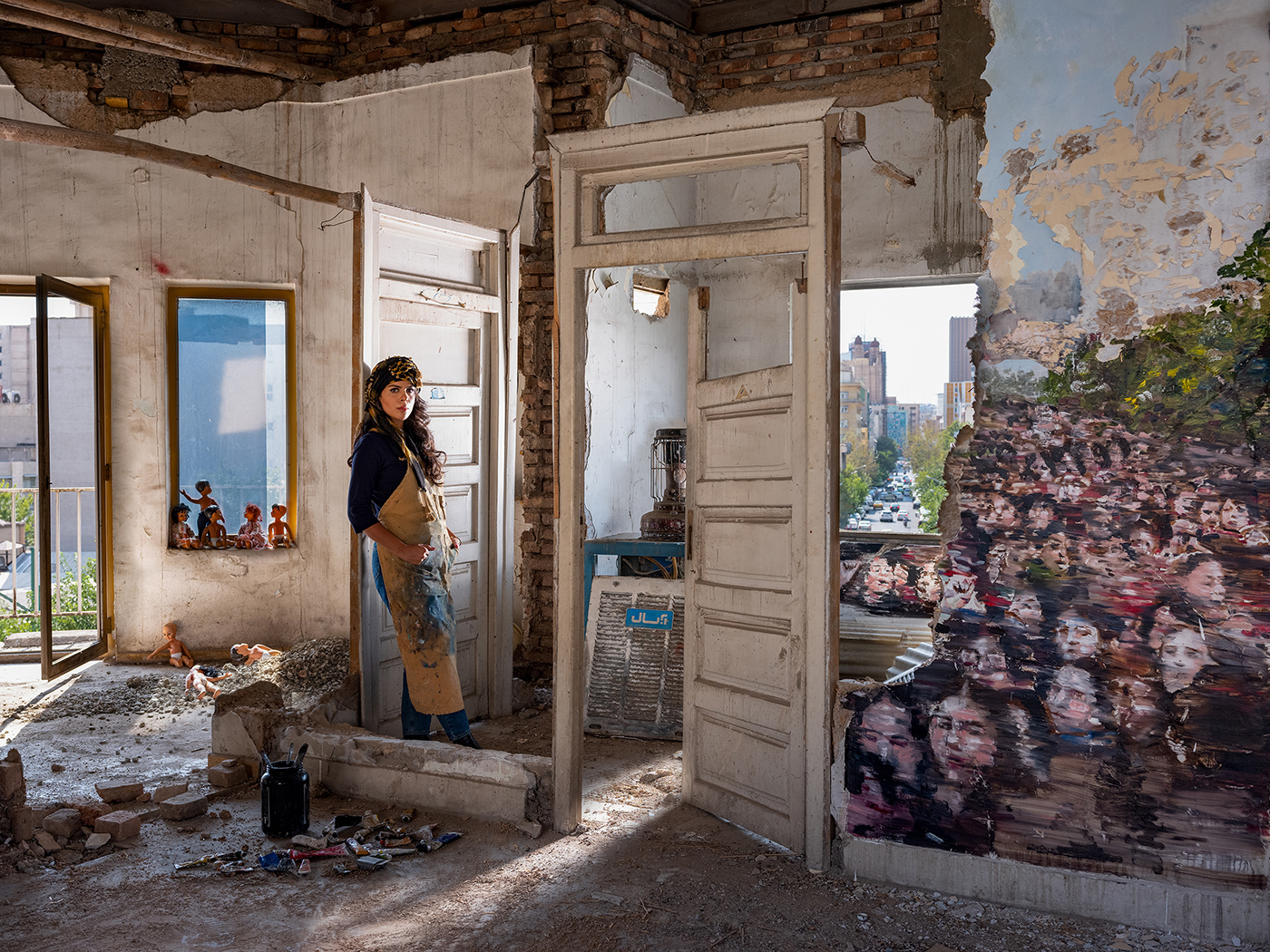 Soodeh Davoud: Soodeh painted on the wall of an apartment in the heart of Tehran being evacuated for years. The inhabitants of this apartment had witnessed many demonstrations as it has a view to one of the main and important streets of Tehran. Soodeh is an international artist who does not believe in emigrating because the subject of her works is driven from her country. Most of her work is influenced by women’s movements in the early days of the Iranian revolution and their struggle for equal rights 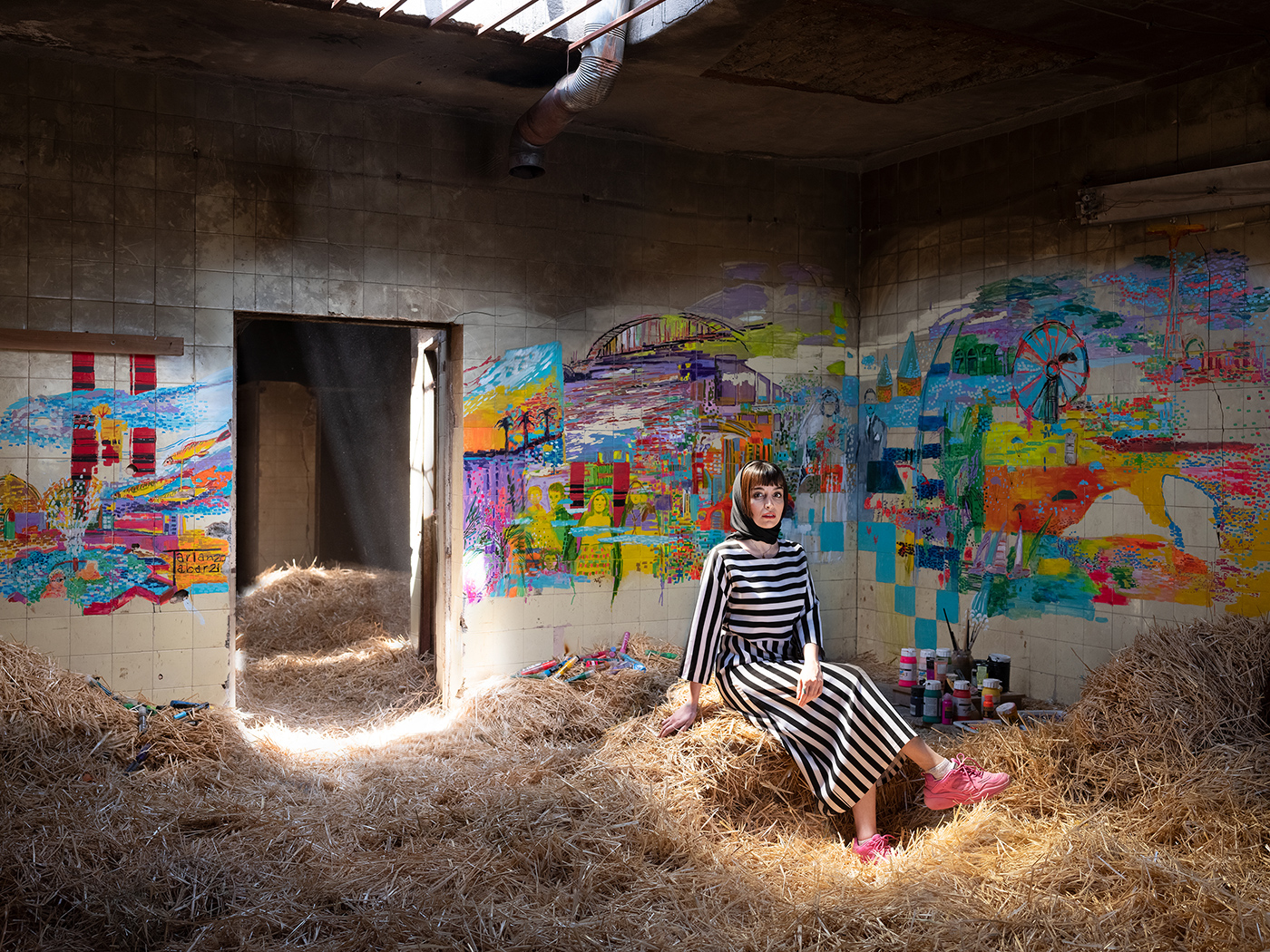 Tarlan Tabar: Tarlan painted on the wall of a public bath which had been turned into a hay barn for some time. Tarlan has spent all her time in her painting studio for the last two years and rarely goes out due to the epidemy. Believing in the political struggle for freedom and change, she writes and informs on social media against the current situation. For her, painting is a window to the past and to the collective memories of the people of her homeland. 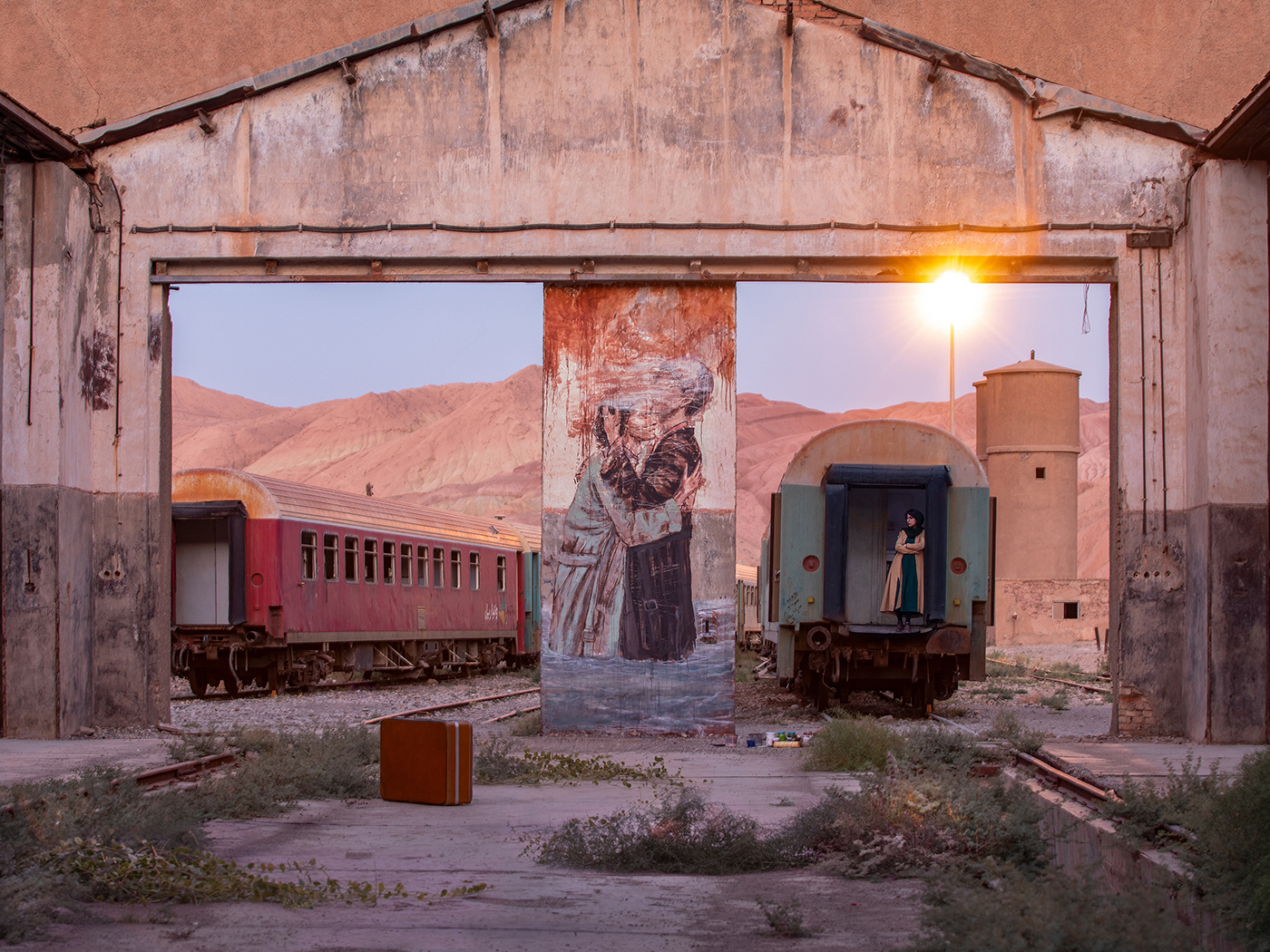 Raziyeh Iranpour: Raziyeh painted on the wall of an abandoned train station from the first Pahlavi era. Razieh, painting for many years, is getting ready for her first solo exhibition in Tehran. To be successful and independent, she has gone through a long and difficult journey and has been living in a small rented house away from her family for a very long time. 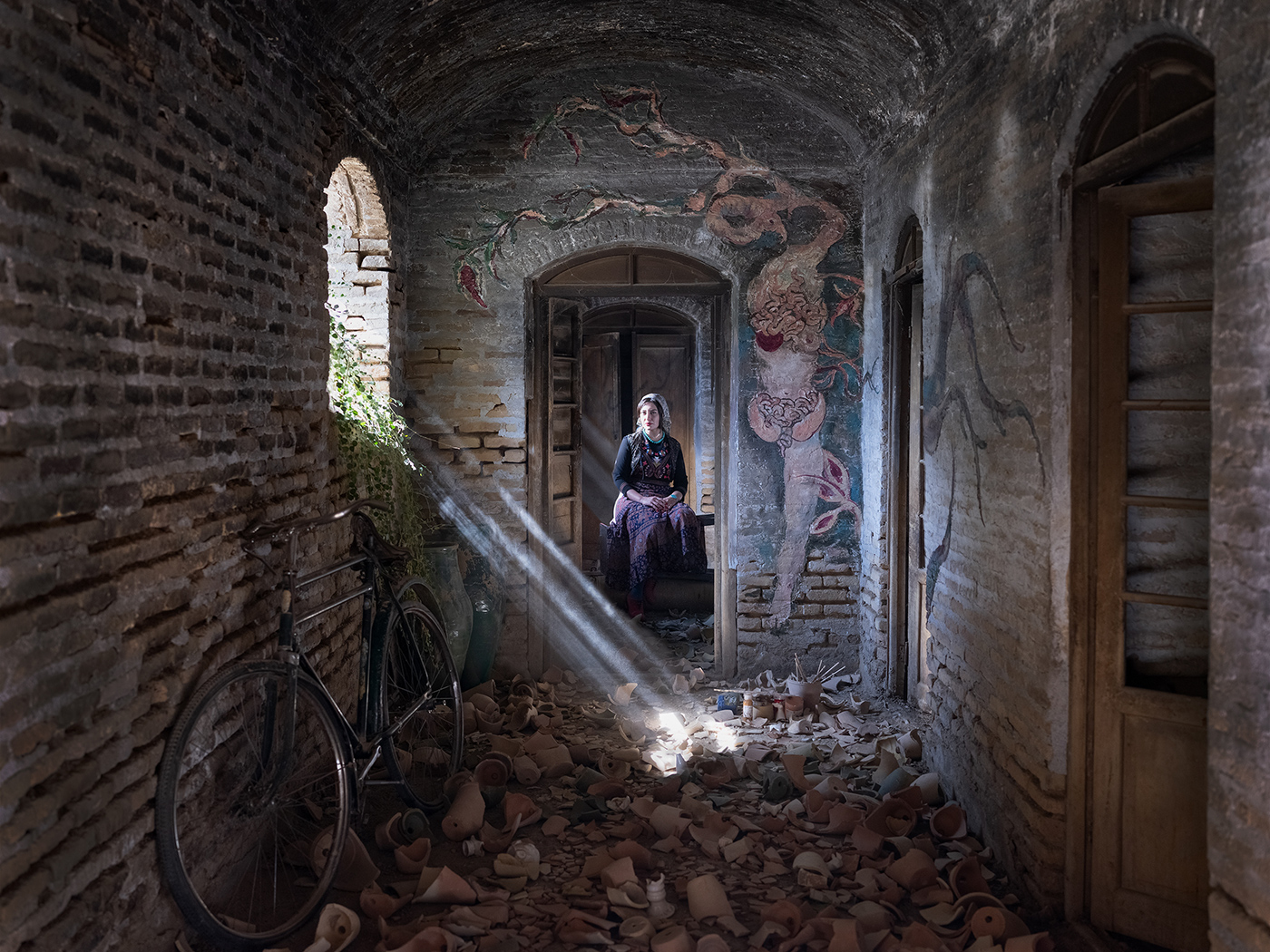 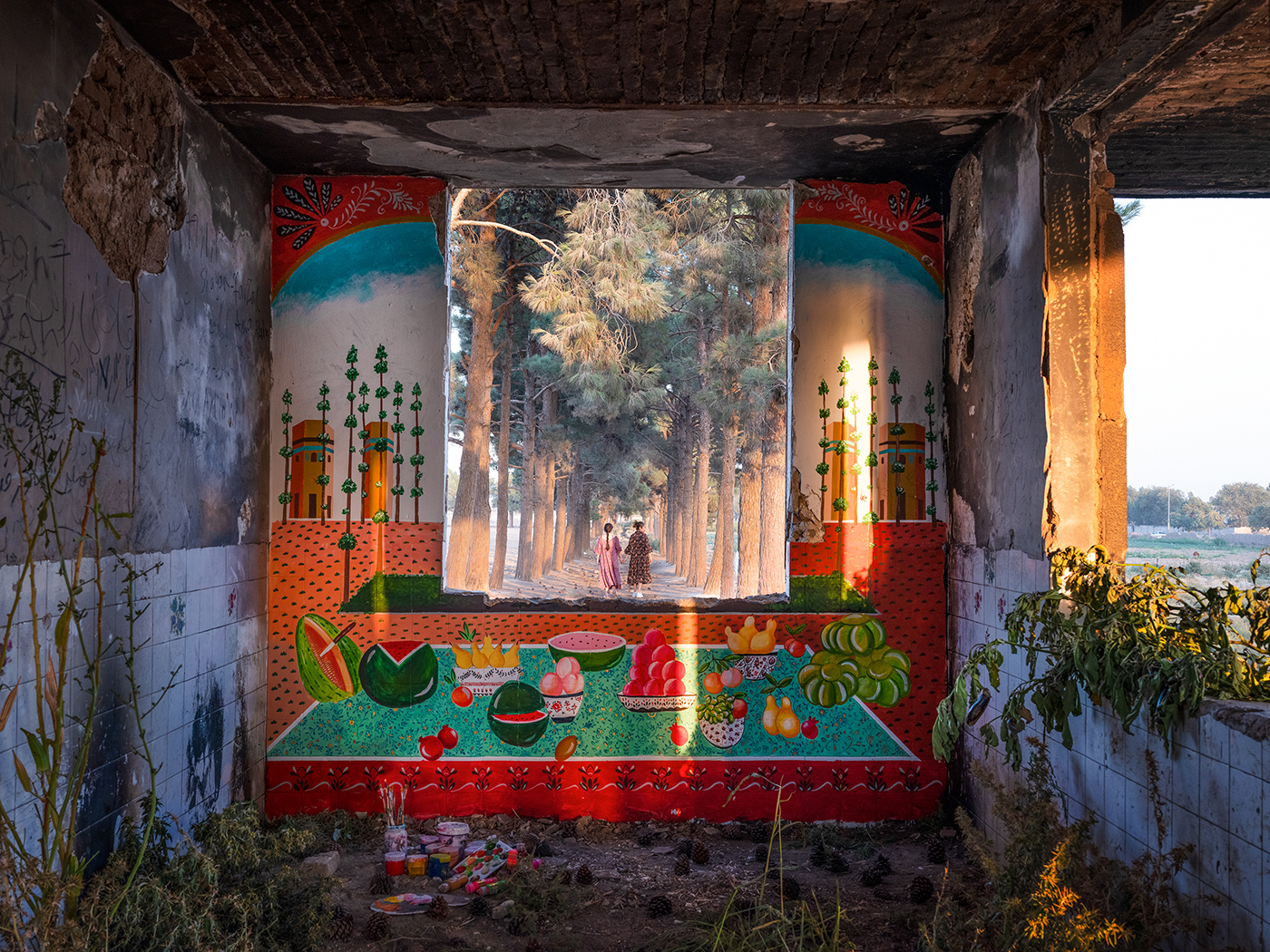 Manijeh and Parisa Hejazi: Manijeh and Parisa are sisters and always work together on their paintings in their studio. They painted together on the wall of an abandoned coffee house in the suburb of Tehran. They both have dedicated their lives to art and painting, and spend around 12 hours a day in their atelier. Their style is mostly driven by Iranian traditional painting with an attempt to update it.