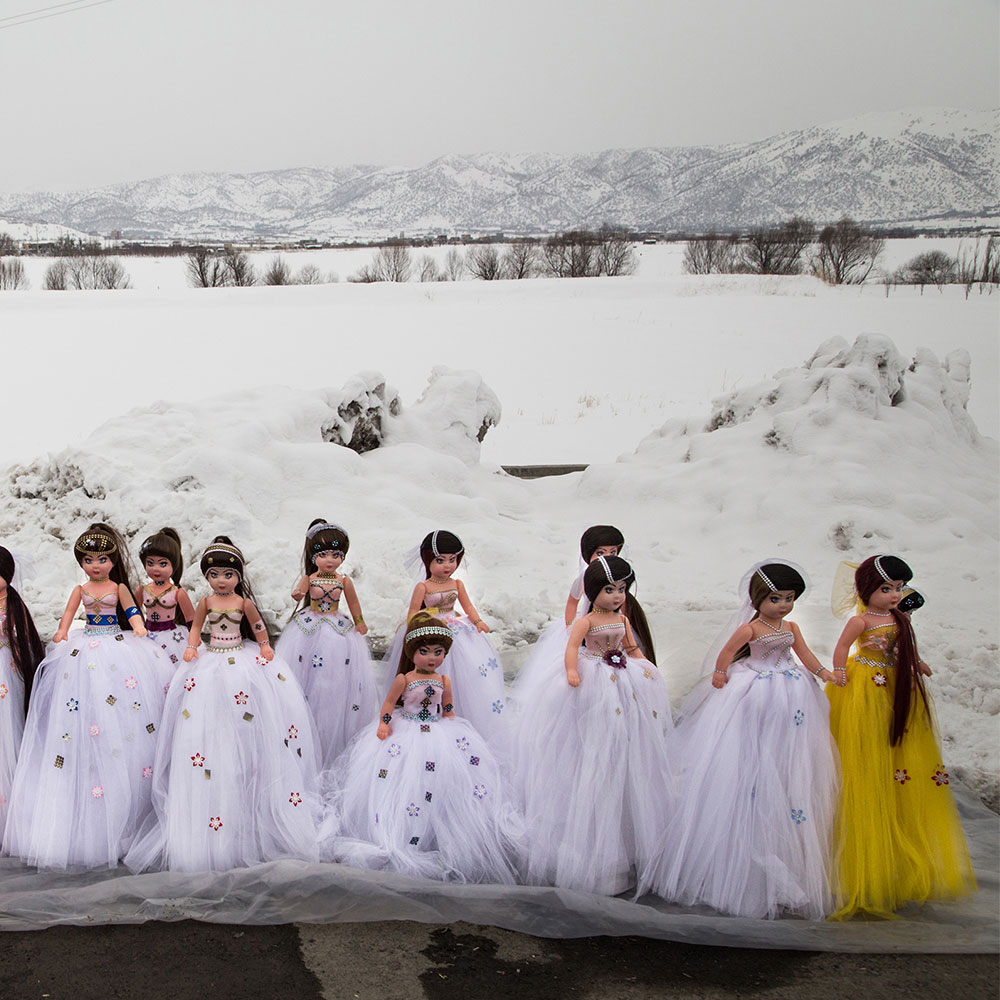 Child marriage is a serious issue in Iran’s current sociological climate. According to the law, Iranian girls are ready to be wed at the age of 13
and Iranian boys can take a wife at 15 years old, claiming mere teenagers not yet emancipated from their parents have the sexual and social maturity, civil understanding and competence of starting a family or simply entering a legal contract of such magnitude. The official records of National Organization for Civil Registration show that, in recent years, approximately around 40000 children under 18 get married in Iran, annually. The photo collection presented, is a demonstration on the issue of child marriage in Iran. In some cases, a lot of these kids against the norm of their region’s culture and traditions were coerced to marry young. Younger than 18 and sometimes younger than 13.

Jashn-e taklif is a big ceremony that holds for 9 year old student girl and 15 year old boys. When he or she reach a certain age and get matured, called  » Mokallaf « . A person reaches the puberty ages must obey religious orders and obligations and conform to the rules which god has forbidden in Islamic rules. This is the image of Jashn-e taklif in Golestan province,located in north-east of Iran. Girls and their teachers stand back to an alter called « Mehraab » and face to « Imam Reza (8th imam of Shiite religion) Shrine » for praying Allah. 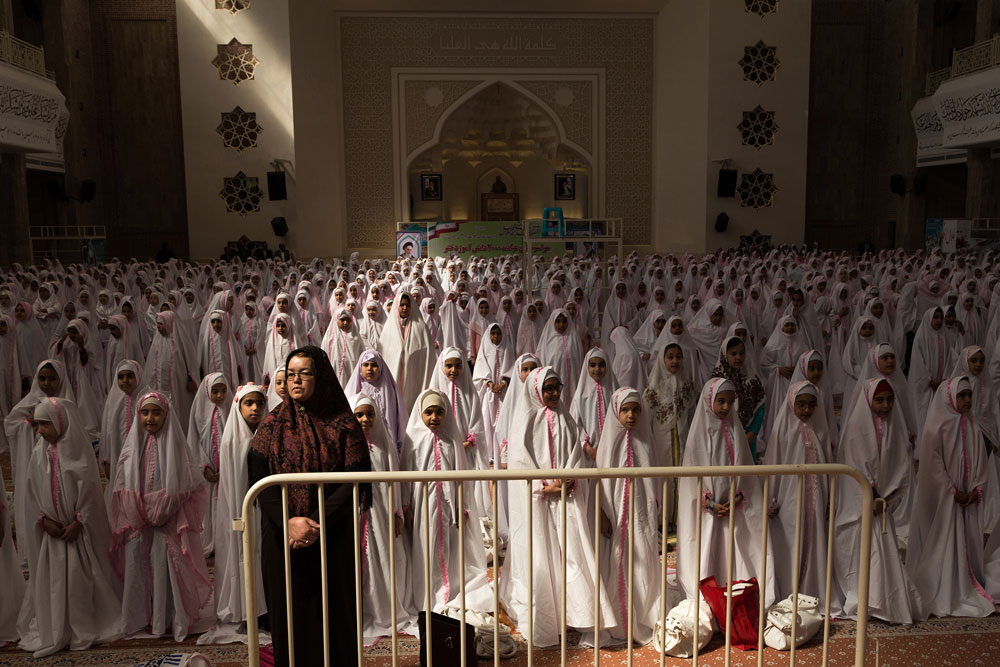 A photo of an engagement ceremony held in ‘Bidak’ village located in ‘North Khorasan’, north eastern province of Iran. Maryam who has the engagement dress on, is 10 years old. Maryam has finished elementary school, Her 26 year’s old mother, Nahid, married when she was only 9. Despite her daughter is eager to study in high grades, she is not allowed, by her dad, to study beyond elementary school. When I asked her mother why your daughter got engaged so young, she answered “she has to grow up with her husband to protect herself from evil and sin. » Maryam has not started her puberty yet. 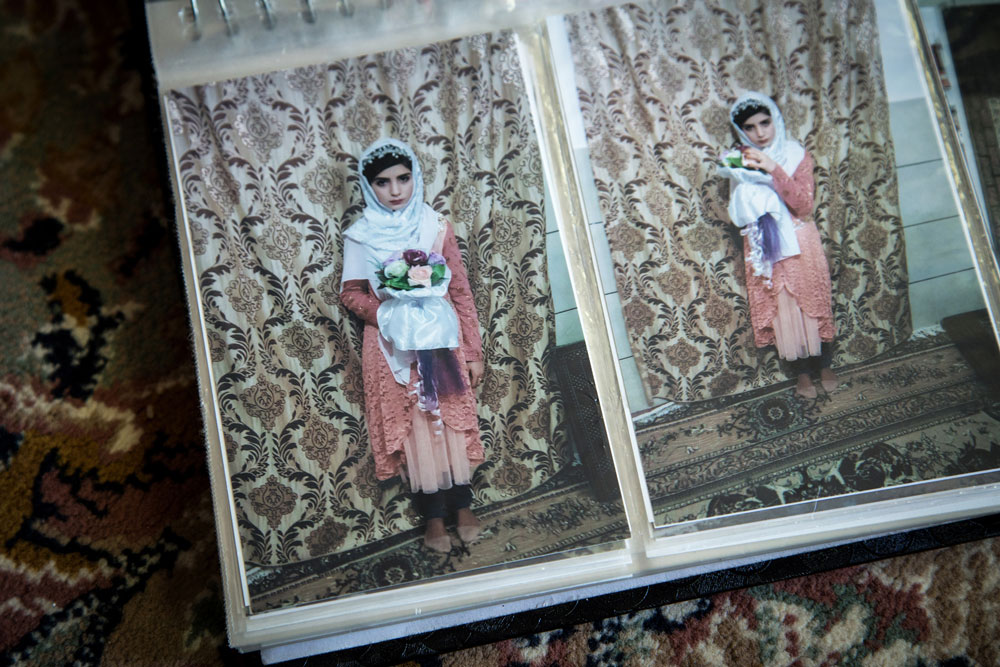 This is 16 year old Nafiseh`s wedding ceremony in »Char`oghli » village of « Gomishan » one of the western cities of “Golestan » province in north-east of Iran. She left school at 7th grade. Nafiseh stands in center of the image. 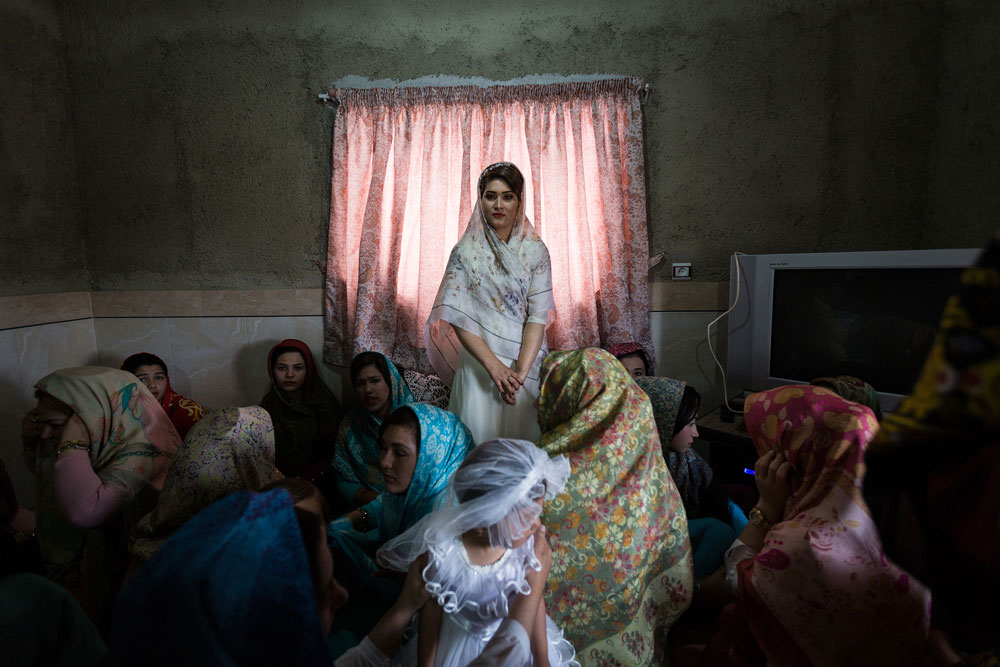 Samaneh, who stands on the right side of the picture, is eleven years old who engaged him to the 15-year-old Hamed, who stands on the left. In recent years, in some Iranian provinces, girls were engaged boys from their childhood, even when their mother was pregnant, so that they would marry in the near future, In most cases they are forced to marry, Otherwise, they will be rejected from the family, and no one wants to marry a girl. This tradition continues in some villages of Iran until today. Samaneh loves playing very much and loves animals. When I ask her about her marriage to Hamed, she remains silent and does not know anything about it. She is still immersed in the world of childhood, and does not understand the meaning of marriage. They live in the village of Mor Zard in Kohgiluyeh and Boyer Ahmad in the southern part of Iran. 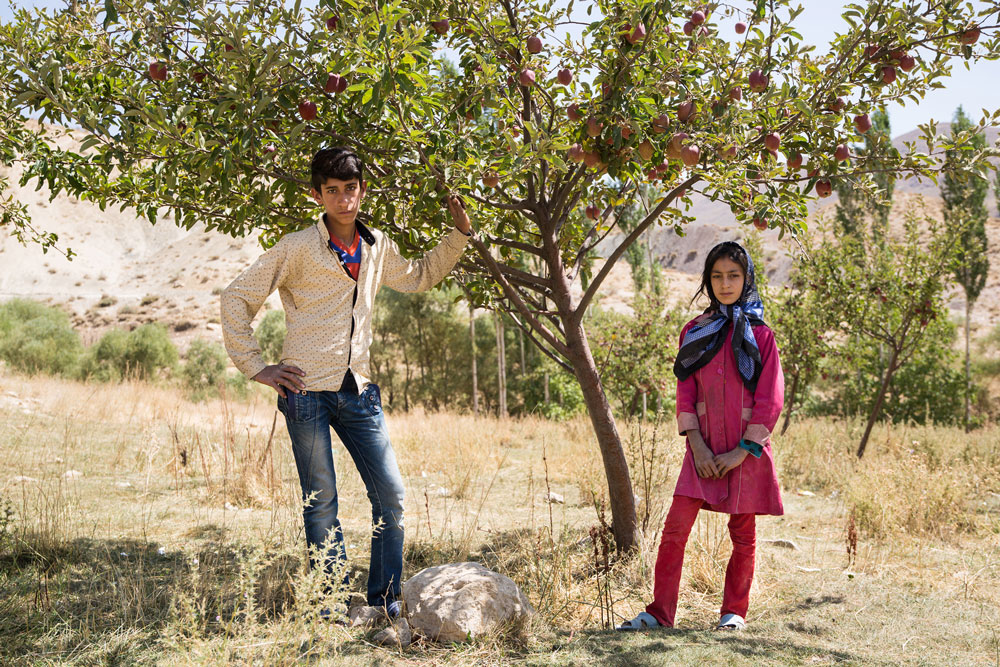 Mina, 9, looks at her mother’s hand in the right corner of the picture, showing me the engagement dress of Mina. Mina has been engaged 3 weeks ago in this photo with Mohsen, 17 years old. Mina lives with her family in the village of Bidak, North Khorasan province. Mina has not started her puberty yet. North Khorasan has the second rank among low-marriage among Iranian provinces. 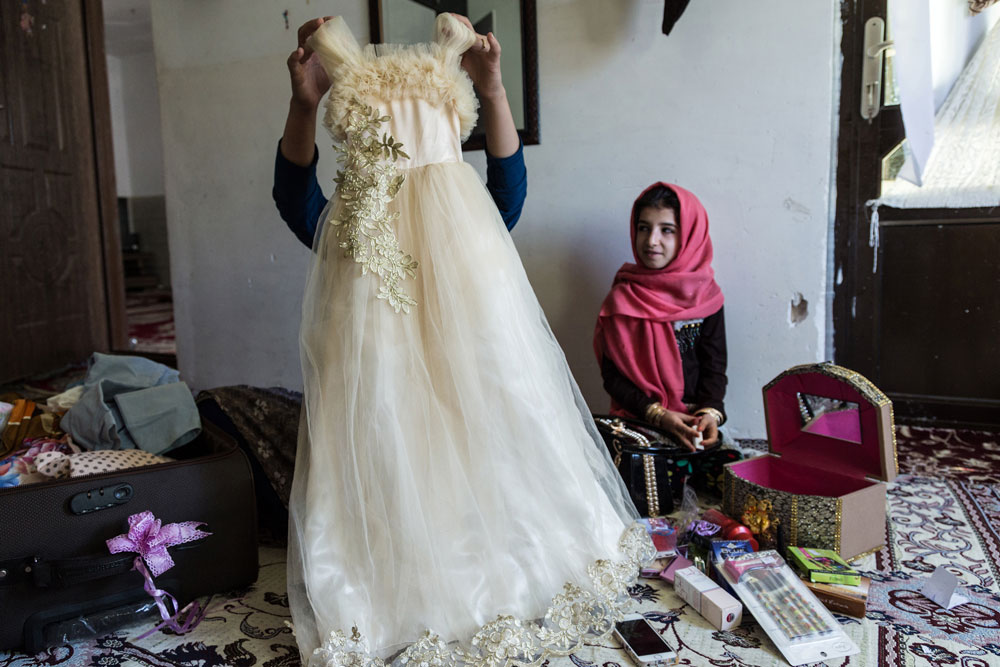 Farahnaz on the right side of the picture is 19 at her wedding ceremony today. Farahnaz, from the age of twelve, loves Zakaria and is nominated at the age of fifteen. In the hope of marrying Zakaria, Farahnaz has only been taught to the tenth grade. She and her family live in a village in the city of Maraveh Tappeh from Golestan province, in northern Iran. Mahdieh marries Hamid at the age of 16 when she dances to the left of the picture. In this village, it is customary for most girls to marry before the age of eighteen. 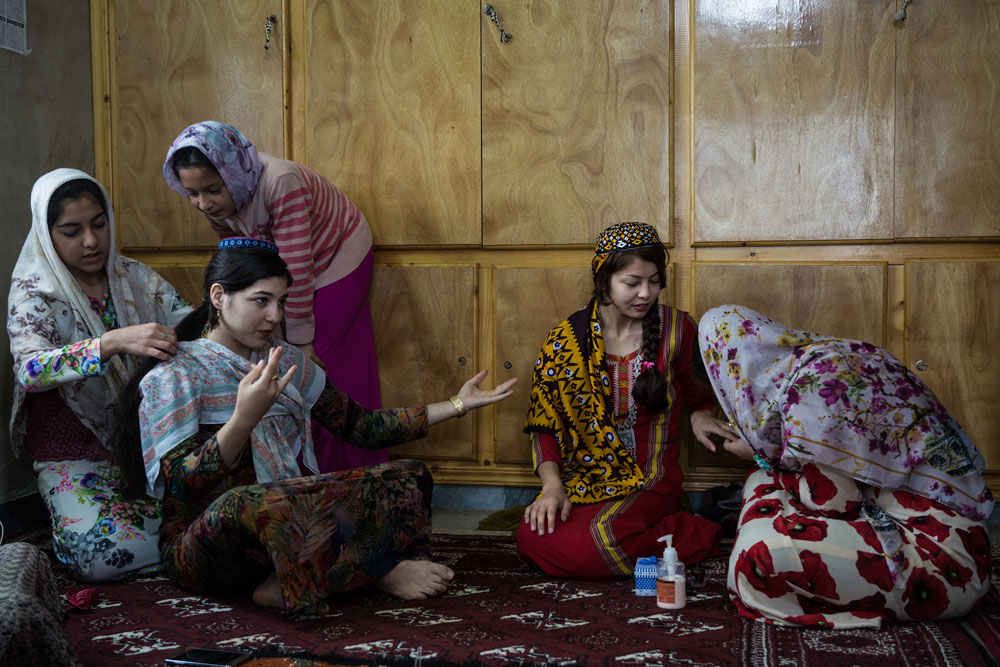 Mina in center of this photo is 13 and she has engaged with Taghi about 3 months ago. Most of her classmates have married in this village and she liked to marry like her friends. This photo captured from Mina in taghi’s paternal house. She has moved in there from couple days ago to stay with Taghi. Taghi left school at second grade and has no desire to keep on his study. After their marriage, Mina has to leave school. When I asked them to stand next to each other, Taghi doesn’t like me to take photo of his wife. These days, Taghi is building a house for themselves beside his father’s in « Bidak » village in « Northern Khorasan » province. 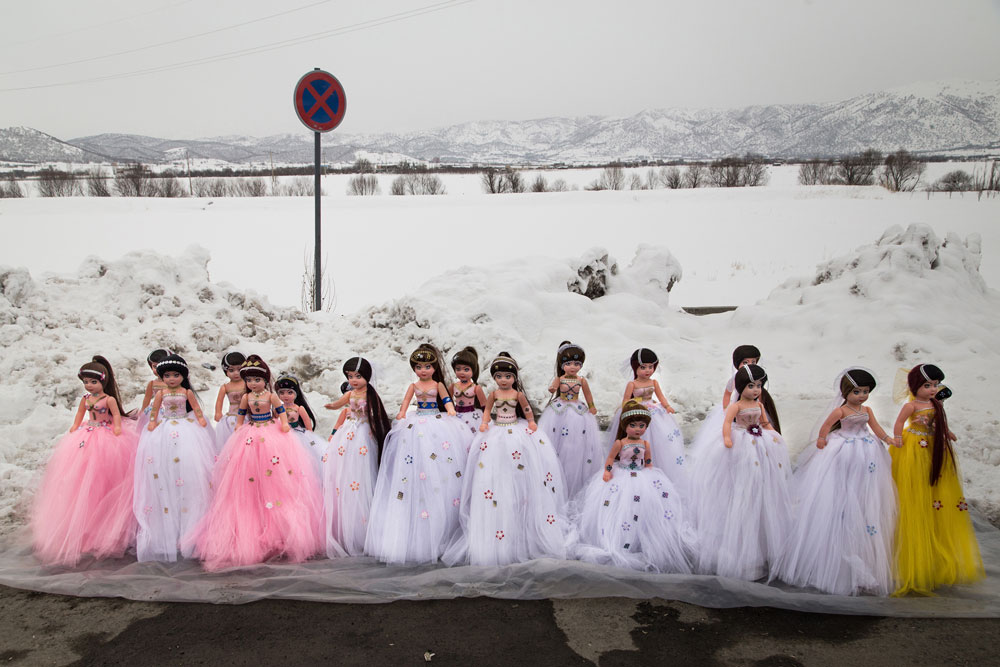 Dolls in Kurdish wedding dress are being sold by a peddler in Marivan, a city located in Kurdistan province, west of Iran. According to statistics, child marriage rate is high in this this province. 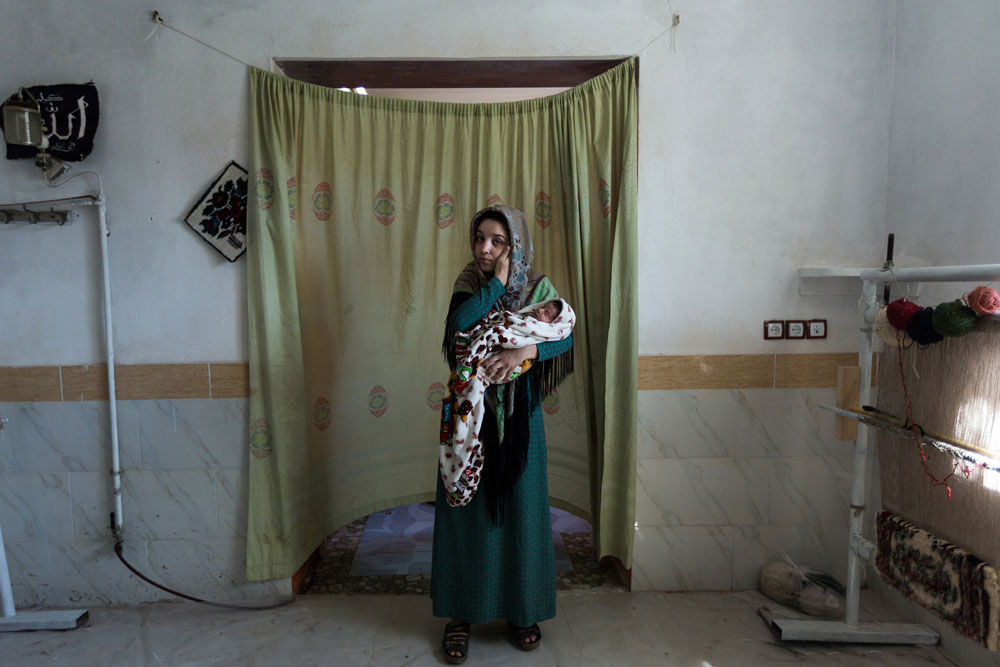 21 year old Bahar is mother of two girls called Reyhaneh and Rahelleh. In this image Reyhaneh was born ten days ago and Rahelleh is 4 years old. Bahar got married at 16 years old and her first childbirth was at 17 which is so painful for her. In this image, she brings Reyhaneh to a charity in the city « Gomishan » one of the western cities of “Golestan » province in north-east of Iran to visit doctor for free. 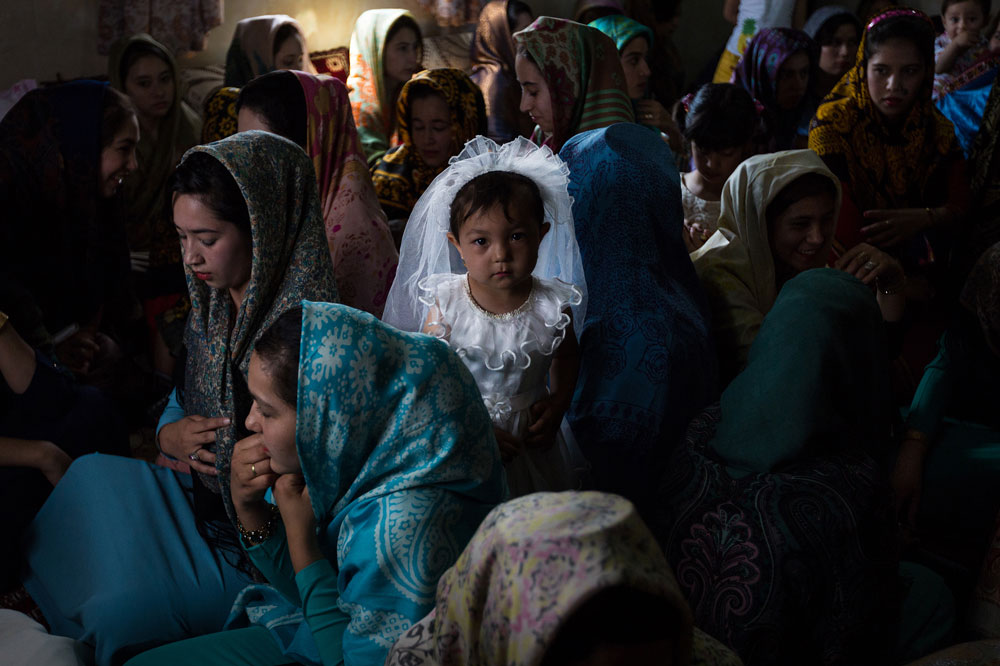 Little girl in bride dress in wedding ceremony of 16 year old Nafiseh who lives with her parents in « Char`oghli » village of « Gomishan”, one of the western city of “Golestan » province,in north-east of Iran. 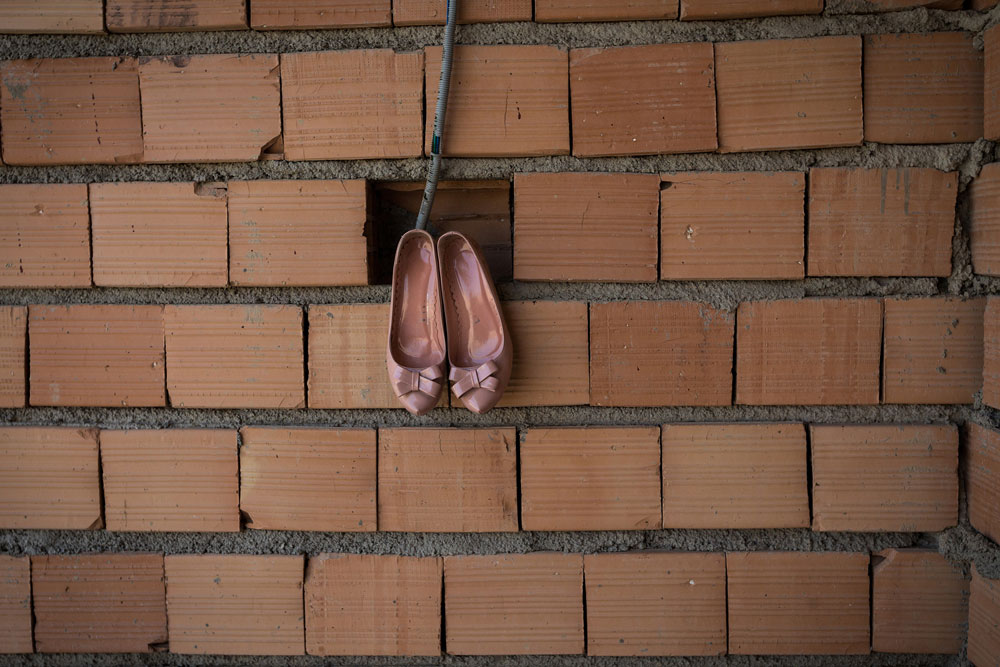